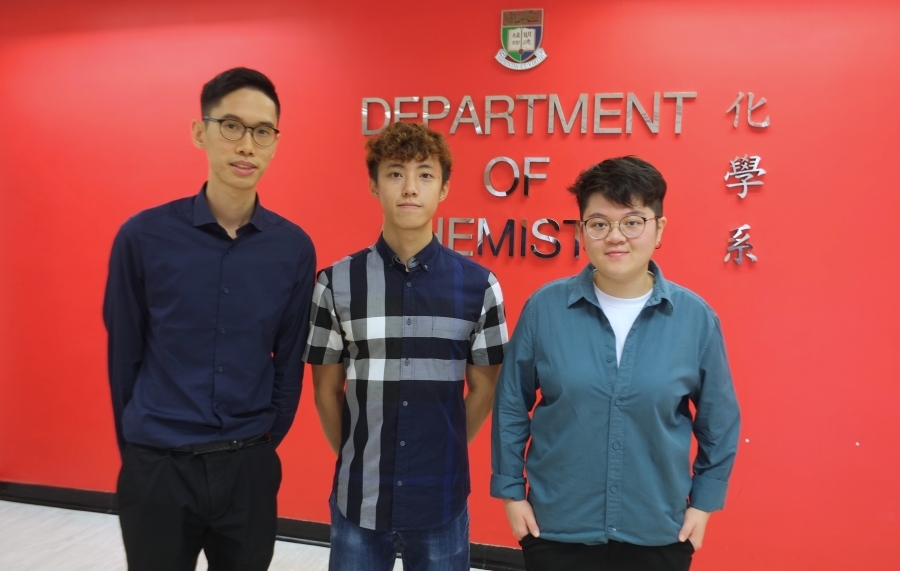 Dr Alan Chan Kwun Wa is awarded the Croucher Fellowship for Postdoctoral Research and will be conducting research on metal organic frameworks to generate new hybrid materials at the University of Tokyo. His supervisor at HKU was Professor Vivian Wing-Wah Yam, Philip Wong Wilson Wong Professor in Chemistry and Energy.

Two students are awarded the Croucher Scholarship for Doctoral Study: Gerald Julius Chik will start his doctoral study on gene-editing biomolecules at the University of Oxford while Chung Hoi Ting, Katie, will study for a PhD in catalysis at UC Berkeley. Both achieved a First Class Honours for their undergraduate studies. Their supervisors at HKU were Professor Che Chi-Ming, Head of Chemistry and Zhou Guangzhao Professorship in Natural Sciences, and Professor Yang Dan, Morningside Professor in Chemical Biology, respectively.

Dr Alan Chan Kwun Wa's doctoral research at HKU involved the study of supramolecular chemistry of platinum (II) and rhodium (I) systems for applications in luminescence molecular devices. At the University of Tokyo, Alan will further work on the supramolecular frameworks of other low-cost metal systems with an aim to generate new hybrid materials for environmental and health applications.

Metal organic frameworks (MOFs) have emerged as a popular new materials research topic. Each year, new MOF structures are discovered. With their unique nanochannel and nanocapsule architecture, MOFs can be effectively utilised for guest confinement, transportation and adsorption for various applications, such as CO2 reduction catalysis, stabilisation of labile molecules, unique chemical transformation and molecular electronic devices. They show great potential for a variety of applications, including gas storage and separation, catalysis, biomedicine delivery, and chemical sensing.

"Facing the challenges of air pollution in Hong Kong, these multifunctional MOF materials can be specially designed to capture and detect harmful compounds at low level to safeguard citizens. With suitable functionalisation, the MOF capsule can also be utilised to catalyse the decomposition of the harmful gases and pollutant to improve our environment," Alan said.

Gerald Julius Chik's undergraduate project was on catalyst development and catalysis. He will pursue a DPhil degree in Chemical Biology at the University of Oxford by extending his research to chemical modification on biomolecules. Gerald is particularly interested in CRISPR, a potent gene-editing tool due to its precision in targeting specific gene within the entire genome. Through re-engineering of CRISPR components, scientists could develop light-emitting genomic probe which targets specific gene with high fidelity. In future, this could serve as a diagnostic tool for genetic defects and related medical conditions such as Huntington's disease.

"I have been fascinated by the capability of chemists to design small molecules to study and manipulate biological systems. The interwoven nature between chemistry and biology of this project offers me new perspectives to bridge the two disciplines and bring innovative solutions to existing scientific and medical problems," Gerald said.

Chung Hoi Ting, Katie went on a short exchange at UC Berkeley during her undergraduate years at HKU. She will be returning to UC Berkeley for her PhD in catalysis in September 2019.

Katie has been working in the field of Chemical Biology, in particular the design, synthesis and investigation of a visible-light-excited photoaffinity probe. Target protein identification is essential in drug discovery and photoaffinity probes (PAPs) can facilitate such process by capturing the real-time transient interactions of these molecules with live-cell imaging. Katie's undergraduate research project aimed at designing a PAP that can be excited by visible-light which carries much lower energy, causes less damage to cells and thus enabling effective live-cell imaging of healthy cells. Scientists can then observe at real time interaction between drug molecules and their respective target proteins.

"In addition to receiving professional training as a chemist throughout my PhD studies, I also aim at developing into a responsible and insightful scientist who has the knowledge, critical thinking and global vision to help tackle new scientific problems," Katie said.

The Croucher Scholarship for Doctoral Study covers the receiving student's return ticket, tuition fees, medical insurance plus aloowances including an annual allowance of US$30,300, which is subject to review and for a maximum of three years, an additional US$2,000 per year of development allowance to cover conferences and workshop attendance.

The Croucher Fellowship for Postdoctoral Research covers the recipient's return ticket, medical insurance plus allowances including an annual allowance of US$48,240, annual research allowance of up to US$15,000 and yearly development allowance of US$2,000.